THE HISTORY OF ST. PATRICK'S 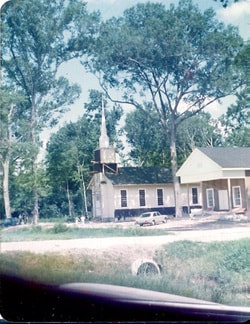 ​St. Patrick's Church was founded as a mission of the Diocese of Louisiana on March 17, 1957 in Zachary, Louisiana.

"About that time [1957], I started St. Patrick's in Zachary on St. Patrick's Day.  We had to have a priest come in, and we made a combination of St. Andrew's in Clinton, St. Patrick's in Zachary, St. Francis in Denham Springs and St. Luke's.  They were all just beginning.  That rector was Bob Hall."  (Remarks by Bishop Robert Witcher who was the rector of St. Augustine's, Baton Rouge at the time.)

On March 17, 1957, 18 Episcopalians met in the band room of Zachary High School and quickly began calling themselves "St. Patrick's."  On January 15, 1958, the group of four missions was split.  St. Andrew's in Clinton and St. Patrick's in Zachary were yoked as one parish under the leadership of its rector, The Rev'd Charles B. Romaine.  Fr. Romaine was killed in an automobile accident on March 23, 1963 -- a Sunday morning -- as he traveled between the two churches.  Fr. Harry Allen came to be the rector in September of that same year.

In the early 1970's Dr. Howard Martin donated 2.56 acres on Hwy 64 on the extreme west end of town in memory of his late wife, Ethel Brabston Martin.  Shortly after this donation, St. John's Catholic Church in Zachary sold its building to St. Patrick's for $2500.  It was separated and became the church and the parish hall on the present site in January of 1976.  The parish hall was named Martin Hall in memory of Susan B. Martin.  Fr. Allen resigned in June of 1986 after 23 years.  Due to hard economic times, St. Patrick's became a mission congregation again in November of 1986.

Father Robert Slocum was assigned to the parish on July 5, 1987.  He served four years and resigned to take a new assignment in Wisconsin in the summer of 1991.

A young deacon named Stephen Craft was assigned to the parish Jul 1, 1992.  Deacon Craft became Father Craft in December of that year and served the parish until 1999.

Fr. Matthew Rowe was appointed as the vicar in 2000 and very soon after became the second rector as St. Patrick's became a parish for the second time in its history.  Father Rowe served faithfully four years before resigning to become the rector of a parish in the Diocese of Mississippi.

Father Miller Armstrong was asked to be the interim priest-in-charge upon Fr. Rowe's resignation.  This short-term placement lasted three years. His love and gentle pastoral care for the parish is cherished to this day.

At the 171st diocesan convention in March of 2008, St. Patrick's once again surrendered its status as a parish to become a mission of the diocese.  Immediately, The Rev'd Chad Jones was appointed as vicar of the congregation of about forty.  Two years later the little country church regained its status as a parish and has no intention of needing to hand it back again!  Due to the rapid growth of the community and the dedication of the liaty of the parish, St. Patrick's has seen remarkable growth since the late 2000's.

On January 12, 2014, St. Patrick's began a significant expansion and renovation to the historic church building.  There were many surprises: some pleasant and others not quite so.  Among the unpleasant surprises was near-catastrophic structural damage caused by years and years of termite damage.  The scope of the project changed and grew to accommodate this reality.  After a pause of a few months to regroup, St. Patrick's commenced construction again with a view of completed a church -- doubled in seating capacity -- by January of 2015.

With God's help, we will continue working to know and make known the Lord Jesus Christ as we gather to worship, learn, serve, and share the Gospel in our community and throughout all the world.
2014 ​Groundbreaking on the expansion and moving day followed by services held in Martin Hall.
On February 8, 2015, St. Patrick's returned to its expanded and renovated church.  With seating capacity more than doubled, the dedication of the Herget-Lytle Organ and the gathering of priests and people from all over the deanery, it was an emotional and joy-filled day.  See the slideshow below to see pictures of the wonderful day.